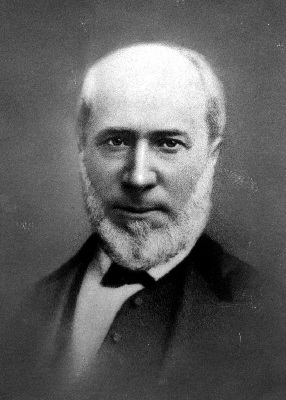 Edward Seguin (né Édouard Séguin) was a physician and educator born in the small town of Clamecy, France in 1812. He moved to Paris in the mid-1830s for schooling. In 1837, he met Dr. Jean Marc Gaspard Itard, who became his mentor.

After Dr. Itard's death in 1838, Seguin worked with Dr. Jean-Etienne Dominique Esquirol, chief physician at the Salpêtrière Hospital in Paris. Seguin and Dr. Esquirol published pamphlets describing their success in educating idiots. Seguin was given direction over a larger group of patients at the Bicêtre Hospital, under Félix Voison. Despite promising beginnings, Seguin had some disagreements with the officials there and was discharged.

He immigrated to the United States the late-1840s and took a job at Dr. Samuel Gridley Howe’s school for idiots in Boston, but soon left to join Dr. Hervey Backus Wilbur at the New York State Asylum for Idiots in Syracuse. Seguin later served as an educational director at the Elwyn State School.

Seguin is best known in the United States for introducing "the physiological method." This stemmed from the belief that idiocy was caused by a disorder of the central nervous system. Strengthening the nervous system, he believed, would improve the person’s abilities of control. He felt that through the use of physical exercises and sensory development, the cognitive abilities of the developmentally disabled could be increased.

Seguin believed that those with mental retardation could be trained, and learn to do things. He spent much of his time focusing on vocational training and self-care skills. This was a view that opposed the prevailing view of the time that idiocy could not be cured or sufferers improved.

"Idiocy is a specific infirmity of the cranio-spinal axis, produced by deficiency of nutrition in utero and neo-nati. It incapacitates mostly the functions which give rise to the reflex, instinctive, and conscious phenomena of life; consequently, the idiot moves, feels, understands, wills, but imperfectly; does nothing, thinks of nothing, cares for nothing (extreme cases), he is legally irresponsible; isolated, without associations; a soul shut up in imperfect organs, an innocent."