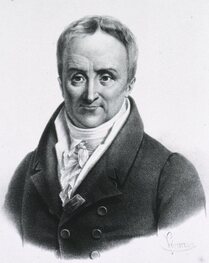 (Images courtesy of the National Library of Medicine)

Phillipe Pinel was a French physician who was active in the late eighteenth century to the early nineteenth century. He is best known for his work in unchaining the patients at the Bicêtre Hospital (the male insane asylum in Paris) and later at its female counterpart, the Salpêtrière Hospital (image above on the right). He did this after becoming director in 1794.

Dr. Pinel moved from the practices of bleeding, purging, blistering, and confinement with chains, to ones that were more open—such as those involving friendly contact with the patient and purposeful activities. Chains and shackles were replaced with straight-jackets as required.

This “moral treatment,” as it came to be called, would serve to end treatments that tried to cure demonic possession and start psychological approaches to care. He started keeping a history of each patient’s care and worked to improve the quality of workers at each institution.

Dr. Pinel also had a connection to “Victor the Wild Boy.” Pinel was the leading authority on mental illness in France at the time and was acquainted with Dr. Jean Marc Gaspard Itard, the physician who attempted to train and civilize Victor.