African-Americans and the Disability Experience: From Colonial Times, Desegregation, Advocacy and Achievement — A five-panel banner stand that highlights the perspective of African-Americans in relation to their experience with disability. This exhibit covers the first African slaves brought to colonial America, Brown vs. Board, civil rights, and medical accomplishments. To view click here

The Quest for the Cure: Polio in America: A four-panel banner stand exhibit that documents the polio epidemics of the 20th century. The exhibit explores the disease, the ways in which polio changed America, the development of the March of Dimes, and the vaccines developed by Salk and Sabin. To view click here

Self Advocacy: A History of People Speaking Up for Themselves: A four-panel banner stand that traces the Self-Advocacy Movement from early educational facilities to the development of organizations established for and by individuals with disabilities. This includes the enactment of the Americans with Disabilities Act.

The Kennedy Connection: A four-panel banner stand exhibit that showcases the contributions of the Kennedy family, from the founding of the Joseph P. Kennedy Jr. Foundation to the establishment of the President’s Commission on People with Intellectual Disabilities. It also highlights the work of Eunice Kennedy Shriver and Edward M. Kennedy. To view click here

Moving Forward, Looking Back: A two-panel banner stand that shows how the evolution of services and social attitudes toward individuals with intellectual disabilities have changed over the past two thousand years.

In the Game: Sports and Disability: A three-panel banner stand timeline style exhibit that chronicles events and individuals who have transformed sport and recreation for people with disabilities. From early educational and habilitation efforts to highly competitive modern amateur and professional activities.

Madness in America: A History of Mental Health: A six-panel banner stand that provides an overview of the history of mental health in the United States. It features the development and expansion of mental institutions, changes in medical care and treatment, and contributions by individuals who were recipients of mental health services. To view click here

Reel Life: disABILITY Goes to the Movies: Many motion pictures have been made that have disability themes or actors with disabling conditions. Over the years, actors portraying a character with a disability have increasingly been the recipients of the Academy Award for Best Actor. This two-panel banner stand exhibit features some notable and award winning films and actors from the 1930s to 2010.

Dr. P.H. Skinner: Local Disability Educator, Advocate and Abolitionist: Just before the Civil War, Dr. Platt H. Skinner, a pioneer educator of the disabled, operated three schools for African-American children who were blind, deaf or both. The second school was located in Suspension Bridge, New York at the terminus of the Underground Railroad, on which Skinner may have been a conductor. This two panel banner stand exhibit takes a look at the possible connection between Dr. Skinner and the Underground Railroad as proposed by Dr. Michael Boston.

War and Disability: This exhibit looks at the American military and disability experience from the revolutionary war to present times.

Little Differences: The Portrayal of Children with disABILITIES Throughout History:  A six panel exhibit that examines the depiction of children with disabling conditions in a variety of formats across the ages. Whether appearing in works of fine art, literature, media campaigns or in popular culture, these children were intended to rouse the audience to action. “Little Differences” is an opportunity to assess modern perceptions of disability through the prism of historical imagery.

In Celebration of Down syndrome: a four panel banner stand exhibit that features Medical moments in Down syndrome history, Myths and Misconception about Down syndrome, Opportunities and Independence, and Down syndrome and Pop Culture. 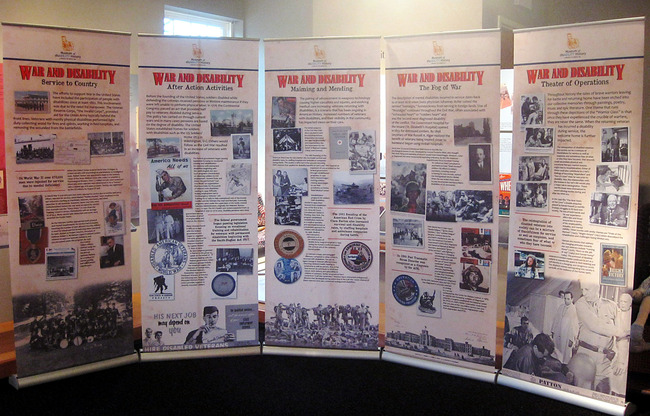